Mombasa to Nairobi - The Train - Finale 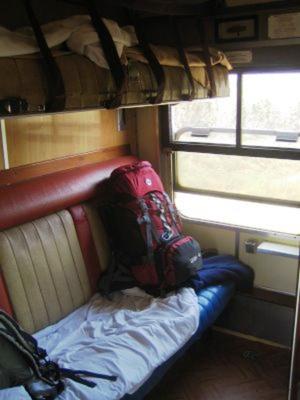 If you read my previous submission about the start of our trip from Mombasa railway station on the night train to Nairobi, then perhaps you will remember the 'guitar man' singing Jim Reeves favourites, the train without its head, the dining car dinner served by staff immaculate in their whites and a meal that was, quite frankly, superb.

There was something quite surreal as we lounged in our cabin prior to the late departure as the train attendant came up and down the corridor tapping on his mini-xylophone announcing 'dinner is served' So to the tinkle on his keyboard we arrived at the dining car to be greeted by the maitre d and shown to our seats.

Just a word of caution - While the meal is being served then the train staff are preparing your cabin with bedding. Security of your valuables is essential so take them with you.

After the meal it was back to the cabin and it was not so long that the train found its head engine and a slow journey started through the Mombasa suburbs and out into the Kenyan bush.

Sleep? Oh yes! After a good meal and a glass of wine it was time to sleep. Peris had the bottom bunk and I was consigned to the upper level. To all travellers on this train let me tell you that the bunks only fit one person.

So as I climbed in the dark back up to the upper bunk, using the sink as a foothold, the window as a handhold, the webbing straps as a belay, I managed to find security and cover myself in the clean sheets and blankets.

The train stopped and started at various points and it was when dawn broke that we realised that we had not gone very far. The train 'captain' came around to report that a derailment up the line would cause delays. The same 'captain' came back later to report the engine was sick. The train limped into Sultan Hamud and stopped, it was terminal, it was not going forward, the head of the train had expired. Monty Python's Parrot

We waited and waited but it was apparent this train was not going to move. The 'captain' announced that buses would be coming from Nairobi to pick up the passengers. I have to compliment the staff on the train as they whipped up a meal to sustain the passengers during the wait for the buses.

I worked out the figures and it was at that moment I realised that we had to try something different.

So Peris and I got out, climbed over the buffers of other trains and walked into the dry and dusty village of Sultan Hamud... grabbed a cold drink and then negoitated a price for a couple of small motorbikes with drivers to take us to the highway. Success and got back to train, back over the buffers and grabbed our cases while the rest of the passengers looked on in disbelief.

The cases and bags ended up on one bike held on with bungy cord - I saw him fall over a couple of times on the way to the highway. Peris and I were cemented together on the back of the other small motor bike as the driver tried to maintain control. Something to do with the centre of gravity? Covered in red dust, we made it to the main Mombasa- Nairobi highway with the cases and grabbed the next matatu to Nairobi and then later back home to Nakuru tired and weary.

It was only later that I tracked our journey on the edge of the Tsavo National Park and I often wonder what happened to the many other passengers. Peris and I made a good choice on the day but I would not recommend it to the faint of heart.

I can look back and smile at our experience on the Train, and I have no regrets because I was aware from the beginning that anything could happen.

So from our singer at Mombasa Station to the whole train experience and subsequent diversion on small motorbikes to the highway it was Kenya in all its diversity and challenges.