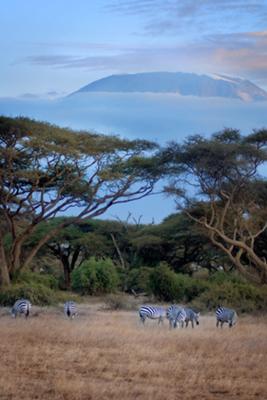 Zebras at the foot of Kilimanjaro 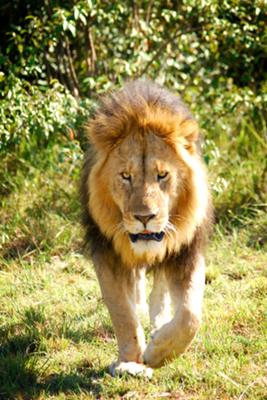 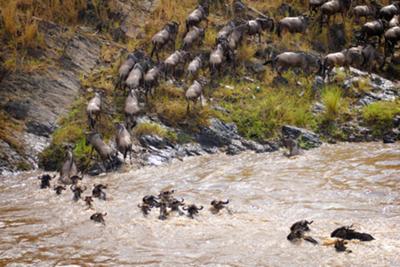 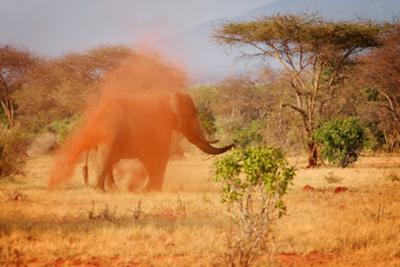 It is Wednesday morning, about 5 a.m. We have just landed in Mombasa airport. It is small and half empty, therefore it doesn't take much time to get the visa. Out in the car park we are welcomed by Nelson – our guide. So, the adventures are to begin!

There are five of us in the van (not counting Nelson) – a pretty weird bunch, too: a Catholic priest from Austria, a German gay couple and us – should I add Eastern Europeans.

The first impression of Kenya is its people – very friendly, always smiling and willing to chat with you. Just say Jambo(2) to start a conversation. Unfortunately our German mates in the van are not as open and willing to chat. So, we can concentrate on the view outside the windows or have a nap without being bothered.

Our first ride is to the Tsavo West National Park. It is just as long as all the others we had – half a day. According to Nelson's math we covered about 2500 km during our week of safari.

It is afternoon and we have reached Tsavo West park. Nelson is obviously experienced and skilled – he is trying to get as close as possible to the animals and even helps to compose the best scene for a photograph. Nelson's skills are rewarding and by the end of our first safari day we have already seen (and photographed) four animals out of the big five – elephant, buffalo, lion and leopard. Rhino is still missing, but there are very few of them left in Kenya - only a few hundreds of black rhinos and none of the white ones. Zebras, gazelles an antelopes don't really catch our attention anymore. There are just too many of them here.

Amboseli National Park is our next destination. It lies at the foot of the highest mountain in Africa - Mount Kilimanjaro. The view is incredible. At almost 6000 meters the mountain rises above the plains of Serengeti and Amboseli, peaks through a thin layer of clouds and tops off with a white touch of snow. During the rain season almost half of Kilimanjaro is covered with snow.

There is an unproven story that Kilimanjaro was once in the territory of Kenya, and was given by Queen Victoria to Kaiser Wilhelm as a birthday present in 1886. Since then the border of Kenya and Tanzania makes a small curve upwards, leaving Africa's highest peak on the south side.

Next we squeeze through the jams of Nairobi and go to Lake Naivasha to see hippos and flamingos. According to the statistics, hippos hold the record of killed people in Africa, therefore we are slightly startled and scared when one of the deceivingly calm looking animals tries to attack us in protection of her baby. Ben (the driver of our boat) is nimble, he knows these tricks and steers the boat to a safe distance where we watch the hippo return to her little treasure.

Hippos, just like many other animals, live in families that have only one male and some half a dozen females. The male is a real tyrant – whenever a female gives birth to a young hippo male, they both have to move to live elsewhere, otherwise the old male kills the young one. Well, he just doesn't want any competition. Then the mother stays with the baby for about 3-4 years until the young hippo male can protect and feed himself. Now she can return to her family, but the young male will make his own family in a few years.

In one of the hotels we were staying at we were told to use the security escort when going to the restaurant after dark. The reason? Hippos love the grass around here. We didn't quite believe it but still called the guy with an AK47. After dinner and a few bottles of beer, our German colleagues were ready to go to bed. They said we didn't need any security and the hippo story was just a joke. But still there were guys with guns waiting at the door ready to accompany us to our bungalows. Lucky us – there was a hippo peacefully grazing just a dozen meters from our door.

Next morning 7 a.m. We are in our van going to one of the best known safari parks in Africa – Masai Mara. Our goal is to find a rhino (did not succeed) and to see the big migration. The population of animals is just impressive. There are about 1,5 million wildebeests in Masai Mara, and I am almost sure we saw them all. Massive herds and winding rows of wildebeests accompanied by occasional zebras walk south to cross the Mara river. The banks are steep, and the animals spend hours looking for the best spot for crossing. To see that, you need a skilled guide and a big portion of luck. Well, this whole event is listed as one of the new 7 wonders of the World for a reason. Having found the best spot, the animals recklessly throw themselves in the dangerous muddy water of the river. Many of them end the journey here – they drown, get trampled or become lunch for crocodiles.

The peaceful coexistence of people and animals in Kenya is simply astonishing. Hunting is prohibited for a few dozens of years, but poaching is punished by getting shot on the spot and being left for jackals ad hyenas to feast on (that's what Nelson says). Therefore animals don't see us as a threat. And leopards just continue to lunch even though we are watching their every move just a jump distance away. But the lion, looking for a gap between the cars, stops for a while to look you in the eye, and then slowly goes his own way, fully aware of his royal status and power. Families of elephants strolling along the road, every now and then taking an occasional look at the people in the cars. Only the little ones try to scare us off by making funny noises and running a few paces towards us. But not being successful they turn around and shamefully go back to their mothers.

Tsavo East national park is our last safari stop in Kenya. It is famous for its red elephants. The soil in the oldest and largest national park of Kenya is bright red. And since elephants try to cover themselves in the dirt as protection against insects, they really seem red. Zebras look just dirty.

By the way, elephant's tusks keep growing the whole life (average 65 to 70 years), and we managed to see a few very honourable elephants with tusks that have become an obstacle to even walk.

It is my duty to mention the Kenyan way of driving. To my European eyes the traffic looked like total chaos. I need to admit that a number of streets wouldn't deserve to be called streets, and you'd really need some special slalom driving skills not to part with your wheels. But nevertheless, you would, and I had never before seen so many cars with broken-off wheels. Nelson is careful, and sometimes we have to completely stop to avoid a frontal collision with a truck that's decided to ignore cars coming its way and still take over a few vehicles in front of it.

Every time we stayed in a hotel, people at the reception reminded us to close all windows and the door when leaving the room. Why? Well, things get stolen. By monkeys. These little villains would slide the window open (if you have not locked it) and take all your valuables, or things they consider valuables, and even empty your fridge. But if they don't find any valuables, or things they consider valuables, they might as well defecate in your travel-bag. Well, so much for the nice little animals.

Throughout the whole of our journey Nelson has been very friendly, however reserved. Every time we invited him to a bottle of Tusker beer, he found an excuse and refused. On the last day of our safari trip before going to the beach our little group split up. We stayed with Nelson, the Austrian and Germans left in another van. So we go to the front seats and chat the whole way to our last hotel. Chat about nature, politics, corruption and people. That's when we discover the true reason why Nelson has been so reserved. "Listen," he asked me, "those Germans, are they... like... normal people?" When my laughing fit was over, Nelson explained that the Kenyan society isn't as tolerant towards homosexuals as Europeans are. He doesn't really feel comfortable with them, and they are probably the reason our windshield got cracked with a stone tossed from the road by a car in front of us (a new one will cost about 5000 shillings which is a little less that 50 Euros). Now Nelson would gladly have some beer with us, but there's no time and we have to part. "If you are ever in Kenya" he says, "look me up, I'll take you to my place and show you my family."
Asante sana, Kenya(3)!